“Monophonic music wherein a man has created a dance of God.” That is how Wilfrid Mellers described them. Bach’s cello suites are six cello suites numbered BWV (Bach-Werke-Verzeichnis) 1007 to 1012. The cello suites are some of the most recognizable as well as frequently performed pieces for solo cello.

The history of Bach’s cello suites is somewhat of a mystery, actually. Nobody knows either if they were composed before the solo violin sonatas or the order in which they were created. Trying to establish the exact chronology of these pieces, scholars base their analysis on the styles of particular sets of Bach’s works. They generally believe that the great composer created the suites first, so they date this works earlier than 1720, which is the year mark on the title page of the composer’s autograph of the violin sonatas.

The cello suites were hardly known or publicly performed before the 20th century because of the suites’ technical demands and their étude-like nature. The surviving copies were also non-annotated which made their interpretation very difficult and performance challenging. For a long time the pieces were thought to be just studies.

The revival of cello suites began when Catalan cellist Pablo Casals discovered their Grützmacher’s edition in a thrift shop in Barcelona, Spain. He was only 13 at that time. He began studying them and often publicly performed. In 1936 he recorded the suites at Abbey Road Studios in London. Soon after their popularity soared. By now the suites have been performed and recorded by many renowned cellists. Yo-Yo Ma even won the 1985 Best Instrumental Soloist Performance Grammy Award for his album Six Unaccompanied Cello Suites.

Each of the six suites has six movements. Here is the structure and order of the movements:

Because of their similar structure and the nature of the pieces, scholars believe that Bach intended suites to be not an arbitrary series of pieces, but a systematically conceived cycle. Cello suites are very consistent in the order of their movements. Intermezzo or Galanterie movements between the Sarabande and the Gigue are in the form of pairs which gives the suites symmetrical design.

Johann Sebastian Bach was a German Baroque composer and musician. He enriched German music styles with counterpoint, harmonic and motivic organisation, as well as rhythms, forms, and textures from Italy and France. His life was long and eventful. Here are some most important dates.

The reason why Bach’s Cello Suites are so remarkable is that even though they are written for solo cello, they create in a single line the effect of implied three- or even four-voice contrapuntal and polyphonic music. It makes the Bach cello suites really challenging for a cello player. 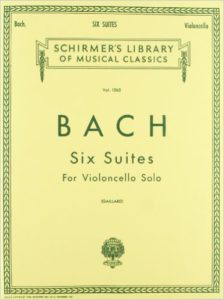